If you own or lead a business today — or if you follow economic trends — those phrases aren’t new to you. The need to develop, attract and hold onto talent has become one of the defining challenges of the post-COVID economy.

Businesses in all industries are grappling with the challenge, including many of the companies who make up one of the most dynamic economies in the nation — South Carolina’s manufacturing industry. Despite jobs that on average pay a third more than the average state salary, manufacturing companies are not immune to workforce challenges.

“South Carolina Manufacturers Alliance is a member-driven organization, and that was the big topic that kept coming up in 2011 and 2012,” remembers James Richter, the organization’s Director of Workforce Development. “At the time, there was a surge of new investments and companies deciding to locate in the state, and the question that kept being asked was ‘How are we going to find the people to fill all these new jobs?’ ”

Indeed, as its members began to increasingly talk about their future talent needs, the South Carolina Manufacturers Alliance started to explore ways it could augment its work to support the industry’s workforce development goals. Through discussions with individual manufacturing companies and industry experts, the idea for SC Future Makers began to take shape.

“A recurring theme from CEOs and plant managers was that we can have the best training programs in the world, but where are we going to find the folks to fill the positions,” Richter said. “We said ‘Well, let’s go out and do something about it,’ even though we didn’t exactly know what that something was.”

A White Paper Turns Into A Campaign

That something turned into SC Future Makers — and it started with a white paper, which was published in 2013. The white paper identified finding a world-class workforce to be the key challenge for manufacturers going forward. The findings made it clear that due to the aging of its workforce, South Carolina would need more and more skilled workers to fill even its existing plants. And with the dramatic success in recruiting new facilities and expansions of existing operations, the challenge would only grow over time.

The white paper led to a concerted effort to tell the story of the manufacturing industry in South Carolina — specifically, the career opportunities available in a modern, dynamic industry. Leaders believed if they could more widely share and explain the sheer variety and number of jobs in what had become one of the country’s most dynamic centers for advanced manufacturing, it would pique the interest of the next generation of workers.

“We started out by going out and saying manufacturing is a great industry and these are the types of jobs and opportunities that are available,” Richter said. “That campaign was important, but it wasn’t enough.”

SC Future Makers initially leveraged elements of a messaging campaign that was designed to raise awareness of the opportunities in manufacturing with high school students and young adults nationwide. While it was successful in sharing that story, Richter and his colleagues weren’t content. They wanted to translate the increased awareness into action.

“We just kept asking, what’s next?” Richter said. “You need something that is more than just a general effort that tells a story. What was missing was the follow up. How do we stay in touch with students after we have the opportunity to showcase the industry and the great companies in our state to them?”

Tallo, a Charleston-based company, helped them fill in that piece. The software company builds platforms for workforce development and employment recruitment. When SC Future Makers and Tallo hooked up, the effort really took off.

“The Tallo platform would allow us to reach folks without having to be everywhere and it would also provide that follow up piece that we had been missing,” Richter said. “So our plan became to go into schools, talk to students about opportunities in manufacturing, and then help the students create profiles on the Tallo platform and that would be our follow up line of communication and outreach.”

With important support from the state of South Carolina, the effort officially launched in 2016 with the goal of getting into at least 100 high schools across the state.

“It was quite difficult … but we did it and every year since we have been building the number of schools and students we have reached,” Richter said. “South Carolina is one of the biggest small states there is. There is a lot of ground to cover and a lot of hours on the road to reach schools in every corner of the state.” 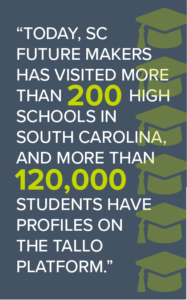 Today, SC Future Makers has visited more than 200 high schools in South Carolina, and more than 120,000 students have profiles on the Tallo platform. Those profiles are accessible to the hundreds of manufacturing companies who have also created profiles on the platform. Students are able to research and connect with companies and technical colleges, and vice versa.

“We have pretty much reached every single high school in the state at this point, and we have now seen a lot of organic growth,” Richter said. “People are signing up without us going in with the direct engagement that we used to have to do.”

And as the platform continues to evolve, the engagement and results promises to further grow. “We are embedding more activities into the platform itself — from messages from technical colleges of companies who are able to proactively share messages about scholarship opportunities, hiring events, apprenticeship opportunities directly with students whose profiles match what they might be looking for.” 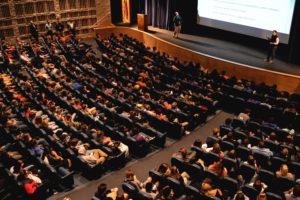 At the same time, in-person presentations remain a vital piece of SC Future Makers. On the eve of the 2022-23 academic year, Richter is excited about the opportunity to get back into schools and interact directly with high school students from the Upstate to the Lowcountry after a lengthy COVID-induced hiatus.

“This will be the first time in nearly three years we are able to physically go back into schools,” he said. “There has been a lot of turnover in the education community during that time, so there will be some work to reintroduce people to the program.

“But we are not starting over. We had to build this from the ground up, but we no longer have to hold students by the hand and kind of stand over them while they create their profiles on Tallo. They intuitively know how to do that kind of thing and they know a lot more about the opportunities in the manufacturing sector and in the technical college system than they used to.

“The focus this year is to remind them of those opportunities and encourage them to keep their profiles updated. That’s an exciting place to be.”

Are you interested in a career, apprenticeship or internship in advanced manufacturing?

Thanks for signing up!